(The following came up in my mind while thinking about something that worries/worried me. These are only my ideas!)

The report on Mandela said he was admitted for a lung ailment. Then 6 days later the report was that his kidneys are failing. To me as an ordinary citizen it sounded like something to worry about. The president Jackob Zuma said – nothing to worry, Madiba is making progress! Family were all coming and going.

When I think back to the last weeks my mother spent in hospital before she passed away this sounded familiar. Her lungs were still breathing and her heart was still pumping but her kidneys failed at the end. She was just lying there. No reaction, no movement. When I touched her, her skin was soaking wet. All the fluids were pouring out of her body through her skin. She was so to say drowning in her own fluids. This sounds to me much like what is happening with mr Mandela.

The reports keep coming positive but in the mean time I think many people do not believe the reports. How can a 94year old body still function without all its organs? I wonder!

The ANC is busy trying to win time and votes for the next election by saying Madiba is getting better.

There are two ways that show  it is not going that well within the democratic Republic of South Africa. One is the economy. The Rand is still dropping and the miners discontent. Second is the people’s living circumstances – the lack of sanitation. These are the biggest problems that have not been solved in the 23years after Mandelas walk to freedom. Everything is slipping away from Mandela into real life now!

April 27, 1994 we as a nation went to the polls to vote for a democratic South Africa. Three days were used to vote. Everybody could vote. Schools were closed for three days because school halls were used as voting stations. Security in and around the poling- stations was very, very strict. Long rows of voter waited outside to cast their votes. It took about 2 and a half hours waiting till I could cast my vote. I voted the first time in Secunda at a Primary school near my home. The atmosphere was kind of nerve breaking , because nobody knew if it  would be calm around the country. Some people expected riots but luckily everything was under control.

Monday June 17, 2013 was Youth Day in South Africa. I saw on the news that there were peaceful marches by young people and meetings held to commemorate the riots and shooting of young people that day in Soweto in 1976. The marches were peaceful and quiet because everybody was thinking about Madiba in hospital.

This event also took my memory way back to 1976 to the Soweto uprising , June 17. I was a teacher in Potgietersrus and my parents were still living on our small holding between Pretoria and Johannesburg. These marches and riots were not far from where my parents lived. My school’s rugby and netball teams had  to play some matches in Pretoria on  June, 18. We were going by bus and sleep-over  in Pretoria the Friday night. My father called the principal to tell him that it was  to dangerous  to travel to Pretoria by bus. Busses were set alight by the demonstrators. We traveled to Pretoria that afternoon. Just before entering Pretoria we saw a bus that was still smouldering along the high way. This was very scary!

Everything was quiet the Saturday morning. We played our games and got home safely late afternoon. The riots were all because the government of the day made Afrikaans the main language in all schools. The police shot and killed some rioting students. It is so sad that those marches were instigated by politics and the young people were swept away by the force of the masses.

Update on health of Mandela- He is deteriorating , no getting better message coming through anymore. This is all we heard this morning on the news in New Zealand.

There are  hand full’s of special days in my life.

One special day I remember is when my son was born.

We did not expect to have children because we got married at a mature age. One thing we discussed ,before we got married ,was the possibility of never having children. It was not in our hands. I am so glad it just happened.

My son was born on a Sunday evening   9.30pm. This happened on August 9, 1981. I was so proud to be a mother. My husband called my parents to tell them it was a boy. My mother, who picked up the phone, could not believe that it was a boy. She asked my husband if it was a twin because it was supposed to be a girl!.

Let me quickly explain: my side of the family are all female. My father was the last male in the family. That is why my mother could not believe it is a boy .

The birth of my son is a very special day and I will always remember it.

Then there is also something special connected to the August  9. After the democratic elections in South Africa  some special days were instated. I have to thank Nelson Mandela for taking the 9th of August as a special day for women. Every year on my sons’ birthday everybody could stay home because it was Women’s Day. My son enjoyed the idea of not going to school on his birthday.

I love to take photos of flowers. The last two months I have been taking photos of my Cymbidium(orchid) I took photos from where the first spike started to come out. Then I kept an eye on it and took photos once a week on a Thursday. Every week I could see how it was growing. Then one evening the first flower opened and I took a photo again. Now all eight flowers are fully open.

I am so glad they all opened because orchids easily throw off their flowers or buds.

There is also a smaller second spike with only three flowers. They are also fully open now. I took a photo again this morning because the sun was shining and the flowers were in the sun inside my room. I usually like to take photos without a flash that is why it was great to have the sunlight shining on them. 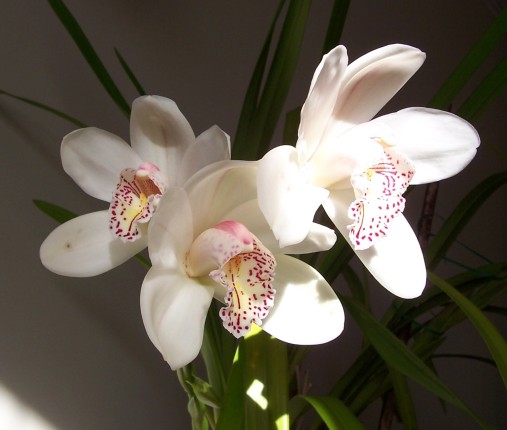 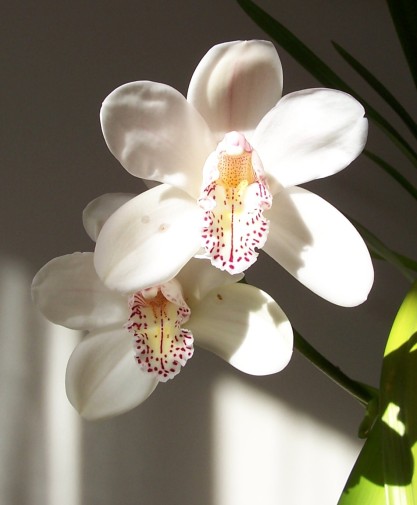