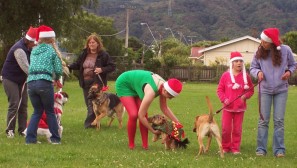 Get ready for the show!

And the winner …Luigi

Show off in the ring

Get into the box!

I just could not resist putting the photos on!

Luigi was only one year at that stage.

He was the best dressed dog !

I found the following

on my Christmas quilt( which I sold yesterday)

New to Word press? Whether you’re a beginner or a professional, you’re invited to get involved in my Weekly Competition to help you meet your blogging goals and give you another way to take part in 2012 Water Dragon Event. Everyone is welcome to participate, if your blog is about photography,Video, Graphic Artwork Or Writing.

Well this is the last of Christmas for the year 2012. We are still here and enjoying all the privileges we have on earth.

My beautiful Christmas tree that gave a lot of joy. 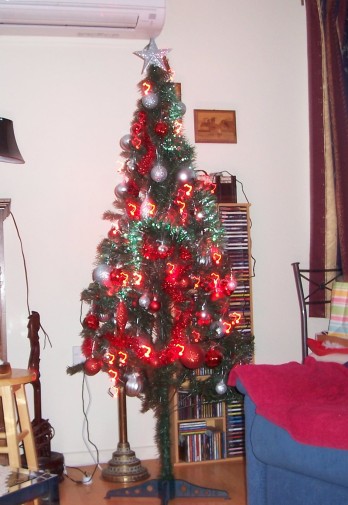 My Christmas table for three

It wasn’t a big occasion

I had a wonderful Christmas with my son and his partner!

My photos are of Trompie in the snow

Wew, I wonder what this could be!?

Let me have another look at the other side! 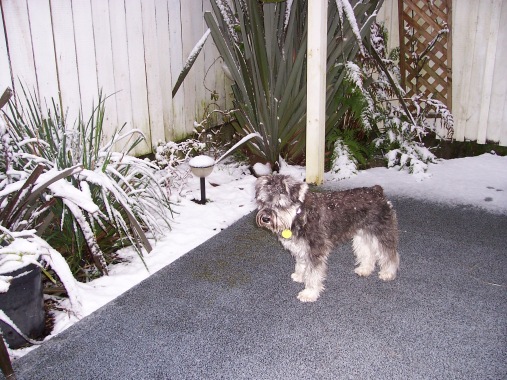 I don’t know what to think of this white stuff.

Is it wet or cold 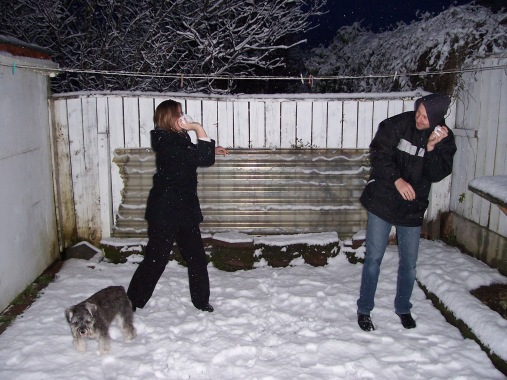 Just look at these human beings!

Throwing each other with balls of this stuff

( We all enjoyed the snow last year)

We do not have white Christmas here.

Today was extra hot with the cyclone nearing us from the north,

Sunday Stills, the next challenge: Holiday Lights and Decorations

Last night I got a surprise. My friend’s son, wife and son brought me a Christmas tree! Since coming to New Zealand I did not have any decorations or a tree for Christmas.  This was a real welcome present. I appreciate it very much that my friend thought about giving this tree to me.

I took some photos of the tree last night using my old camera. 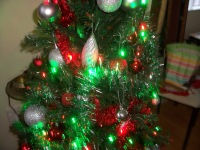 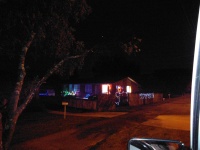 Remembering Christmas is kind of very hard to me.  My parents never went to church while I was a kid. I learned about Christmas in school and Sunday school.

I can remember the last December in the Netherlands before we migrated to South Africa. I was only a girl of nearly six at that time. I remember that I attended a Kindergarten . It had this huge sandpit in the middle of the school. It was covered by a roof. The classrooms surrounded this sandpit.

On December the sixth, I remember that I had to go to school and we children had to wait for St Nicolaas and Swarte Piet. I can remember that we were all supposed to behave very well otherwise Swarte Piet would pick you up and put you in his bag. I could see St Nicolaas arriving through my classroom window. I still have this clear picture of him in my mind ,that is all I remember.

In South Africa my mother used to decorate the lounge with some pine tree leaves and some cotton wool for snow. We never really had a tree. Later years I bought us a small Christmas tree and decorated it. There were always small parcels, one for each one. When I started working we made a bigger issue of Christmas.

When my son was still a toddler we would have Christmas with his grandparents at times. I can remember one year we had Christmas on our own and my son dressed himself  as father Christmas. He put on  a red track suit, put some cotton wool around his chin and an old brown beany on his head. He enjoyed handing out the gift .

I looked up some information about Saint Nicolas:

The tradition of Saint Nicholas Day, usually on 6 December ( [O.S. 19 December (in most Orthodox countries)], is a festival for children in many countries in Europe related to surviving legends of the saint, and particularly his reputation as a bringer of gifts. The American Santa Claus, as well as the Anglo-Canadian and British Father Christmas, derive from these legends. “Santa Claus” is itself derived in part from the Dutch Sinterklaas

In the Netherlands and Belgium, Saint Nicholas’ Eve (5 December) is the primary occasion for gift-giving, when his reputed birthday is celebrated.

In recent years, Christmas (along with Santa Claus) has been pushed by shopkeepers as another gift-giving festival, with some success; although, especially for young children, Saint Nicholas’ Eve is still much more important than Christmas. The rise of Father Christmas (known in Dutch as de Kerstman) is often cited as an example of globalisation and Americanisation.[25]

My scrap-book page with my son as Father Christmas.

We did not do any extra writing today.

There were very good descriptions and a lot to discuss.