I saw these lilies on Monday while walking my walks.

This morning I took my camera along. 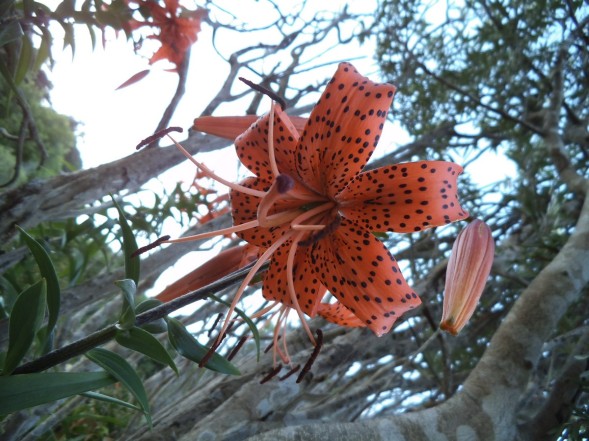 Tiger Lilies are a warm and vibrant addition to any home or garden. Their fiery orange flowers stand out among others. The lilies actually come in to different variations. One is Lilium columbianum, which is yellow and native to North America. The other is Lilium lancifolium, which is more commonly known. It is native to Asia and has the famous orange coloring. Lancifolium roughly means “lance leafed”, refer to the sharply pointed leaves of the tiger lily. Another name that was once commonly used to refer to the same species is Lilium tigrinum.

This species of tiger lily is native to eastern Guam, Japan, China, and Korea. It requires full, direct sunlight. It should be watered regularly and the soil kept moist. It does better with thorough periods of watering less often, than with light, frequent watering. It should be watered about once a week. Lilies are often found growing in ditches, where water collects in the soil, and are sometimes called Ditch Lilies because of it. These plants are fairly hardy and do well in cooler temperate climates, as well as warmer climates, as long as there is regular rain. They do well in almost any kind of soil. Home growers rarely need to use any fertilizer. [3]

People with cats should be careful when owning tiger lilies as a house or garden plant, as parts of this kind of lily are very toxic to cats. They can cause vomiting, kidney failure, and even death if eaten. [4]