The word “flight” brings back some memories from my traveling past.

I have been on a few very long plane flights in my life. One flight I will never forget is the flight from Athens to Rome and back to South Africa in 1976.

I was part of a tour group from South Africa visiting Greece. It was the Saturday of our departure back home via Rome. We visited the Acropolis before going to the airport. While on the Acropolis we heard a bell ringing and thought it was an ice cream cart. But no, to our surprise our bus driver was calling us to hurry up, we had to evacuate the site! We ran down the hill, jumped into the bus and we were on our way. The bus driver was in contact with the airport and the report said that the airport was closed we could not get out. Turkey had declared war against Greece because of the problems with Cyprus  and Macarios who did not want to give up. Greece was a military state! All men 18-45 were called to defend the border, All taxis and busses were used to take them there.

We had to wait in the hotel from the Saturday up to the Wednesday. The Wednesday Greece opened the airport a few hours for the tourists to get out. We hurried to the airport, jumped on the first plane to Rome. In Rome we were still stranded because our connection had already departed on the Saturday. South Africa sent two planes to Athens to pick up tourists. Guess what? We were not on the planes because we were already in Rome. The two planes were full house when they landed in Rome!

We landed the Wednesday night/morning 1 am in Rome. Without food, without money and  in transit. Thursday afternoon  when the two SA planes were gone we had to pick numbers out of a hat to see who will go when there were cancellations to SA.

During the early morning hours after landing in Rome I talked to a flight captain of a DC10 to South Africa and explained our situation. He said he’ll see what he could do to help us (we were a group of 36 tourists and my number was 32 in line for departures)

Well, I have to say, thanks to this flight captain. He was supposed to depart with his DC10 to South Africa at about 9pm Thursday evening. He did not want to go before we were  all on his flight back to South Africa. The airways had to cancel flights from Paris and Greece to make space for all 36 of us.

We did not mind the cancellations because we got the opportunity to fly back home.

Here we are: Rome waiting for what everto happen 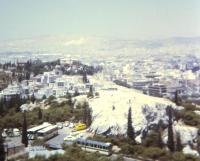 Rock where Paul used to preach. At bottom is the bus waiting for us 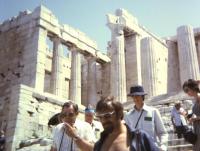 On our way down in a hurry 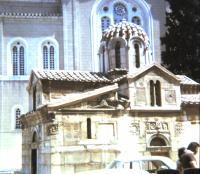