13. Landscape: Take a photo of the skyline, a landscape you see. 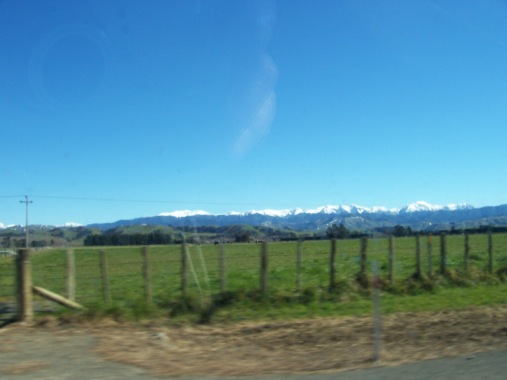 Snow on the Rimutakas. Took the photo while driving.(In motion)

The Rimutaka Range (often referred to as the Rimutakas) is one of several mountain ranges in the North Island of New Zealand which form a ridge running parallel with the east coast of the island between East Cape and Wellington.The ridge is at its most pronounced in the southern part of the island, where it consists of the Ruahine, Tararua, and Rimutaka Ranges.

The Rimutakas run southwest-northeast for 55 kilometres from Turakirae Head at the eastern end of Palliser Bay to the upper reaches of the Hutt Valley where it joins the southern end of the Tararua Range. The highest peak in the Rimutakas is Mount Matthews, at 940 metres. http://en.wikipedia.org/wiki/Rimutaka_Range

Landscape as seen from my front door!

Landscape as seen down the road from my place!