This is a photo I have taken of the Flambouyant tree that grew in front of my town house in South Africa. Every Spring it had these masses of red blossoms.

Delonix regia is a species of flowering plant in the family Fabaceae, subfamily Caesalpinioideae. It is noted for its fern-like leaves and flamboyant display of flowers. In many tropical parts of the world it is grown as an ornamental tree and in English it is given the name Royal Poinciana or Flamboyant. It is also one of several trees known as Flame tree.

In India it is known as Gulmohar (Hindi and Urdu -‘Gul’ means ‘Flower’ and ‘Mohr’ is ‘Peacock’, thus the name suggests a spectacular show of color, like the extraordinary colors of a peacock’s tail[1]). It is also known there as Krishnachura (Bengali: ‘crown of the Lord Krishna). In Vietnamese it is known as Phượng vĩ (means “Phoenix’s Tail) (Vietnamese), Malinche, and Tabachine.[2] In Guatemala, Antigua Guatemala, it is known as “Llama del Bosque”. 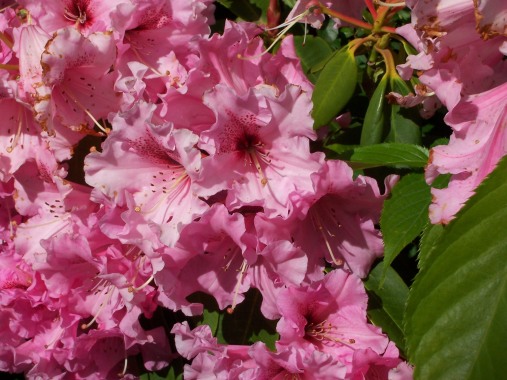 Rhodododendrons – all colors, from white, light to dark pink, purple and red, also yellow and up to orange. The trees grow in gardens and on pavements. 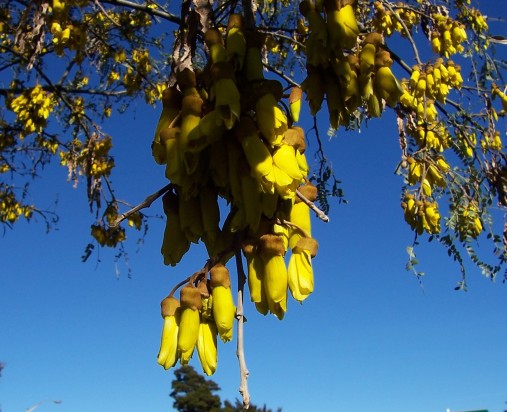 The Kowhai tree is a native of New Zealand .They also bloom in spring.

Kowhai are small, woody legume trees in the genus Sophora native to New Zealand. There are eight species, S. microphylla being the most common. Kowhai trees grow throughout the country and are a common feature in New Zealand gardens. Outside of New Zealand, Kowhai tend to be restricted to mild temperate maritime climates. Species in this group include S. chathamica, S. fulvida, S. godleyi, S. longicarinata, S. microphylla, S. molloyi, S. prostrata, and S. tetraptera.[1][2]

Despite having no official status as such,[3] the blooms of the kowhai are widely regarded as being New Zealand’s national flower.[4]

New to Word press? Whether you’re a beginner or a professional, you’re invited to get involved in my Weekly Competition to help you meet your blogging goals and give you another way to take part in 2012 Water Dragon Event. Everyone is welcome to participate, if your blog is about photography,Videography, Graphic Artwork Or Writing .